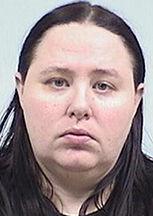 MIDDLEBURY, IN - A Shipshewana woman has been accused of stealing over $100,000 worth of lottery tickets from a gas station she worked at.

The owner of the Middlebury gas station contacted a Hoosier Lottery investigator and looked through security tapes.

The cameras showed 35-year-old Joehanna Marchand hiding a pack of lottery tickets, without paying for them. The Hoosier Lottery investigation revealed 145 packs of tickets had been activated, but not sold.

Marchand now faces up to 6 years in prison.