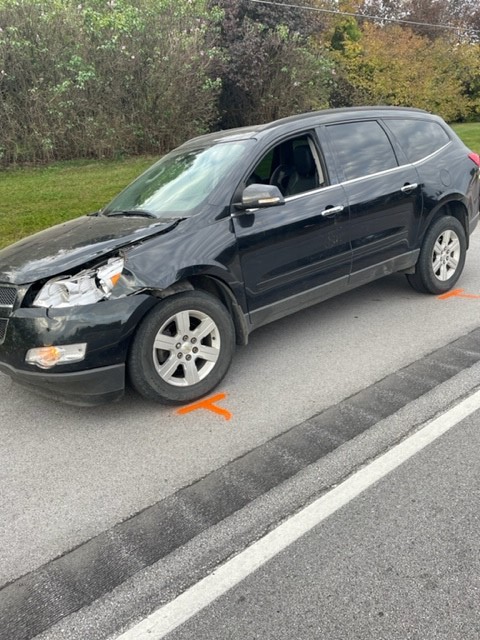 ANGOLA, IN - On 10/06/2022 just before 6:50 am, Steuben County Sheriff's deputies responded to the 300 block of West SR 120 west of Fremont in rural Jamestown Township on a report of a suspicious person in that area. The report indicated that a female was walking westbound in the middle SR 120 screaming and waving at oncoming traffic.

When the first deputies arrived in the area, they located a vehicle parked on the side of roadway. Upon contacting the driver identified as 27 year old Kaylee M. Phibbs of Bronson, MI, it was discovered that a crash had just occurred. Phibbs believed that she had struck a deer that was in the travel portion of the roadway. Upon further investigation, it was discovered that Phibbs' vehicle had struck the female pedestrian who appeared to be the subject of the initial 911 call.

An initial crash investigation indicated that Phibbs was traveling eastbound on SR 120 in a black 2012 Chevy Traverse when her vehicle struck 28 year old Sabrina V. Furar of Angola, IN who was standing in the travel portion of the roadway. Furar was wearing dark clothing and that area of SR 120 was not lighted. The roadway was clear and other than being dark, there were no other adverse weather conditions at the time of the crash.

Furar was transported to Cameron Hospital by Steuben County EMS and then flown to Parkview Regional Medical Center in Fort Wayne, IN by the Samaritan Helicopter in critical condition with head and possible internal injuries. Neither alcohol nor speed are believed to be a factor in the crash.

It's unclear at this time why Furar was walking in the middle of the roadway at the time of the crash.

The incident still remains under investigation by the Sheriff's Office.

**Any criminal charge is merely an accusation. The Defendant is presumed innocent until and unless proven guilty.**